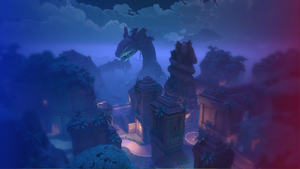 Serpent Beach is one of the maps in Paladins and was released in the Paladins CB30 update.
Like every Siege Map, Serpent Beach also has certain callouts.

Trials of the Realm Bio:
"Serpent Beach is among few Ska'drin ruins still standing along the mainland coast. Its silent stones tell the sorrowful story of its long-removed inhabitants. No wonder it seems to always be under perpetual night."[1]

It appears Corvus has set up a base for his group, the Shadow Tribunal, near this map.[2]