He's pierced as many hearts with his magical longbow as he has broken with his silver tongue, but even he has a stake in the current conflict between the Magistrate and the Resistance, standing up to the oppressive Magistrate on behalf of the common folk.

A longbow that draws back an arrow and releases it for up to 1120 damage every 1.4s.

Replace your arrow with an Impaler Arrow that knocks enemies back and stuns them for 1s if they hit a wall.

Leap backwards and enter stealth for 2s, leaving a mirage at your original location for 3.5s.

Plant yourself in place, becoming stationary for 3s. While planted, your Long Bow draw time is 200% faster and you fire continuously. Re-activating Planted cancels the ability. Acts as a weapon attack.

Enter stealth and gain 30% Movement Speed for 8s. While active, you draw your bow 50% faster and leave a mirage behind for 2s each time you fire.

For all of Sha Lin's cards, see Sha Lin/Cards 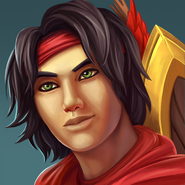 Sha Lin's in-game profile
Add a photo to this gallery

Retrieved from "https://paladins.fandom.com/wiki/Sha_Lin?oldid=8913"
Community content is available under CC-BY-SA unless otherwise noted.