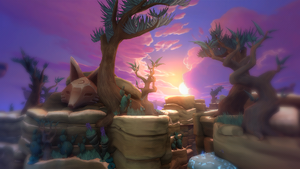 The Game Mode that is currently playable in this map is Siege.

Trials of the Realm Bio (Original):
"Far from the wars that plagued the north, the Shattered Desert had kept its peace for centuries. To this day, the people of the Desert live by the light of the cosmos and worship the Moon Goddess Io."[1]

Trials of the Realm Bio (Beach Bash Update):
"Far from the wars that plagued the north, the Shattered Desert had kept its peace for centuries To this day, the people of the Desert live by the light of the cosmos and worship the Moon Goddess Io. Even when faced with the corrupting influence of the Devourer, Yagorath, the people of the Desert have not lost faith, and have banded together to fight against the Moon Goddess' enemy."[2]

Long ago, the moon was whole. It was united like the Realm once was. But then it shattered, broken, into thousands of pieces. Some shards fell to the Realm. And where they landed, they killed all that they touched, turning a once lush forest into the Shattered Desert, the incident becoming a legendary tale.[3] A group of martial warriors was formed, and they vowed to protect this location, where chaos was now sealed away.

Until the day came one of the warriors would release the chaos, believing her goddess to have abandoned her. With the seal broken, the Shattered Desert now serves as a reminder of where this catastrophe all started. This information comes from Io's teaser trailer and Vora's bio.

As can be seen in Trials of the Realm[1], the Shattered Desert is part of a larger area known as the 'Lunar Coast', alongside Ascension Peak and the Thousand Hands Guild, with Bazaar also being nearby, as can be seen in the official map of the Realm.

As mentioned here, some areas of the forest that was once present here may still be around.

The ruins present in this map are ancient, as mentioned here.

This map does not have a strict vertical limit. To prevent champions with vertical movement abilities from camping on the rocks, there are burning grounds that deals Damage over Time. Parts of the map boundary are also made of this burning ground. This burning ground appears exclusively on this map at the moment.

Quicksand reduce the player's movement speed. Quicksand appears exclusively on this map at the moment.