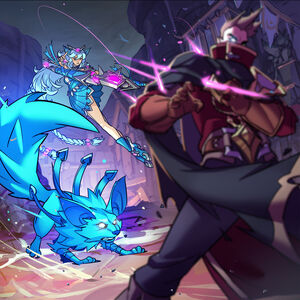 Following the escalating battle between the Magistrate and Resistance, the Shattered Goddess, Io, returns from hiding to protect her people as the battle reaches and engulfs the town of her followers.

For eons, the Moon Goddess Io watched over the Realm, dreaming of the day she could meet those who lived within. Her wish would be granted, when an otherwordly force from deep space collided with the moon, shattering it to pieces and sending its shards falling into the Realm below; some shards contained pieces of this alien force, the Darkness, trapped by the power of the Moon Goddess, and where they landed, they killed all that they touched, turning a once lush forest into the Shattered Desert. Other shards contained pieces of Io herself.

Io saw herself as broken, unwhole, unworthy of kindness, and so, she hid away for centuries, and yet, despite that, a group of followers would come together, creating the town of Bazaar around the shards containing Io, protecting her, as well as creating a martial order of warriors to ensure the Darkness that had shattered their goddess didn't break free from its seal. For centuries, this continued, the desert remaining peaceful, even during the wars that ravaged the northern side of the Realm.

However, not everything can last forever, as this peace would soon reach its end. As the Crystal War escalated, both the Magistrate and Resistance were growing more desperate to defeat the opposing side. The Magistrate, turned to the Legend of the Shattered Desert, of the power that had once turned the previously lush forest into an almost completely uninhabited wasteland, and coupled with strange tears in reality, led to Corvus bringing thousands of troops into the desert in the hopes of using this power to end the war. The Resistance meanwhile, were similarly attracted into the desert by the strange tears, as well as following a warning of the Realm's destruction from Jenos. The two sides eventually met and naturally fell into battle.

First, the two sides battled over the strange tears in reality, and later battling each other once again in the town of Bazaar itself. Io watched the battle, not wishing to fight, but after some encouragement from Jenos, coupled with her desire to not see her people suffer, the Moon Goddess joined the battle herself, attacking Corvus and sending him running for his life.

However, though the battle had ended, the damages and casualties remained. Both Bazaar and the Shattered Desert itself had fallen victim to the destruction caused by the battle, almost every single member of the martial order guarding the ancient seals had been killed.

That is, all but one. The last remaining seal guardian, Vora, believing her goddess had abandoned her and did not truly care for people, coupled with her anger at the Magistrate and Resistance claiming to fight for justice, but only causing destruction, led to her breaking her promise, shattering the ancient seal, and unleashing the monster within to put an end to the Realm and everyone in it.

If the Realm is on a path towards self destruction, she is more than happy to oblige, for she is Vora, Harbinger of the End.