Add a photo to this gallery
Skye is a Flank Class Champion in Paladins, added on November 17th, 2015.[1]

Most assassins prefer to remain anonymous, but Skye thrives on the fame, and lives in the center of attention. Trained by fabled monks of Silver Moon, and outcast for violating each of her sacred vows in meticulous order, Skye enters the fight, to much speculation. Whoever her next target, wives should be mindful of their husbands, for it's said a single glance from Skye can destroy a man's heart.

Noble by birth, Skye abandoned a life of luxury and wealth to pursue her dreams of excitement and adventure. During her time spent on the streets interacting with the criminal underworld of the Realm, she discovered her natural talent and boundless obsession with killing.

When her career as a contract assassin brought her fame and fortune, she caught the Magistrate's attention, and now serves as one of Grand Magister Karne's closest advisors. To her, the War of the Realm is just a long-term contract, one that won't end until the last of the Resistance is dealt with.

A wrist-mounted energy crossbow that deals 150 damage per shot every .1 seconds. Effective at Short Range.

Create a cloud of darkness that lasts 5 seconds, blocking all enemy vision in or out of it. Gain stealth for 3s when entering the cloud.

Enter stealth for 7.5 seconds and gain 25% Movement Speed. Getting too close to enemy players will reveal you while in stealth.

Throw a bomb that deals 3000 damage and destroys all shields.

For all of Skye's cards skye ass, see Skye/Cards 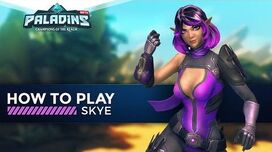 Paladins - How to Play - Skye (The Ultimate Guide!) 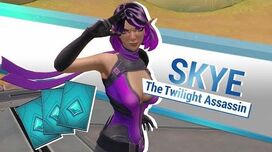 Paladins Skye - "Ratatoskr!"
Add a photo to this gallery 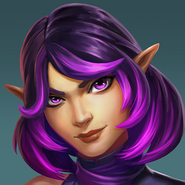 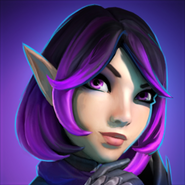 Retrieved from "https://paladins.fandom.com/wiki/Skye?oldid=8912"
Community content is available under CC-BY-SA unless otherwise noted.