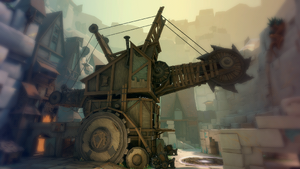 Trials of the Realm Bio:
"The bulk of the crystals in use throughout the realm were sourced from Splitstone Quarry. Most of its inhabitants are Goblins, now peaceful, who have found lucrative work in the mines of the Realm."[1]

Other Information:
As can be seen in Trials of the Realm, this map is part of Crosswind Hold alongside Magistrate's Archives and Stone Keep, as well as Foreman's Rise most likely.

This map also serves as a gold mine, as mentioned here and here, with the latter mentioning it's not a crystal mine, with the crystals champions use generally not coming from here.

Can be found on the innermost flank route closest to the Capture Point. Kills champions on contact, making champions with Knockback abilities ideal for forcing other players into the spinning blades of the machinery and back to base after waiting out the respawn timer...

Can be found on the flank route opposite of the drilling mechanism. Kills champions on contact, making champions with Knockback abilities ideal for forcing other players into the molten hazard and back to base after waiting out the respawn timer...