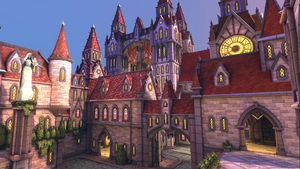 Stone Keep is one of the maps in Paladins and was released in the Paladins OB41 update. It later received a visual rework in the 4.6 update.
Like every Siege Map, Stone Keep also has certain callouts.

Trials of the Realm Bio (Original):
"Stone Keep is the birthplace of the Magistrate, formed in the very location from where the Second Goblin Scourge was repelled by the first iteration of the Paladins, the Realm's Champions."[1]

Trials of the Realm Bio (Shadows Update):
"Stone Keep is the birthplace of the Magistrate, formed in the very location from where the Second Goblin Scourge was repelled by the first iteration of the Paladins, the Realm's Champions. The Magistrate's finest, troops and commanders alike, proudly hail from the heart of the Paladins' greatest accomplishment."[2]

Other Information:
As can be seen in Trials of the Realm, this map is part of Crosswind Hold alongside Magistrate's Archives and Splitstone Quarry, as well as Foreman's Rise most likely.

In the Trickshot update, Stone Keep received a visual rework.

With this map rework we wanted to accomplish two main goals. 1. We wanted the color scheme and architecture design to very obviously reflect that Stone Keep is a Magistrate City. And 2. We wanted to use this rework to introduce a much more urban environment, something we’ve never really put into Paladins before. We wanted this map to feel more like a bustling medieval metropolis, and we expanded on the skybox to reinforce that. The sheer cliff drop is gone, replaced by a wide swath of additional city buildings across a broad canal. We intended the map to feel more like a small piece of a much larger world instead of a castle sitting alone atop a hill. As for the lighting, we’ve wanted to test multiple lighting scenarios on maps for some time, and this seemed like a good place to start. Thanks to the city setting we were able to integrate many sources of artificial light into the visual design so we could continue to highlight important routes and landmarks in the dark. We’re very excited to see how both versions of this updated map are received and we hope you enjoy playing.