Having spent most of his life in the military, Strix was an invaluable member of the Sentinels, tasked with training their elite sharpshooters like Kinessa. He was reassigned after the unit was disbanded — sent to the front lines with the regular army as it prepared to put down the Resistance.

Always the calm and composed professional, he is the master of stealth and camouflage, able to pick off high-value targets before the enemy is even aware of his presence — or that they are under attack at all.

Strix dons the cloak of a hunter, which resembles a strix. He carries two weapons which he alternates between a lethal long-range sniper rifle, and a powerful machine pistol with a high rate of fire. This is quite fitting, as a strix is known to bring misfortune.

Along with the two weapons, he has the ability to disappear into his surroundings, making him invisible for a duration, and can lob a flashbang which can stun enemies while blinding them as well.

Strix is very powerful with his sniper rifle, and has the ability to quickly reduce an enemy's health to nothing. Additionally, his basic attack with the scoped rifle deals the most damage out of any basic attack, making him a great tank melter.

A powerful rifle that fires one 1200 damage shot every second.
Side Arm: A semi-automatic pistol that deals 250 damage per shot.

Look down your scope and gain pin point accuracy.
Flare: Fire a flare that reveals enemies in a large radius.

Enter stealth and hide yourself from vision. While in Stealth your energy is consumed.

Switch to your other weapon.

Throw a Flash Bang grenade that detonates on contact blinding nearby enemies for 3 seconds.

For tips on Strix, see Strix/Tips 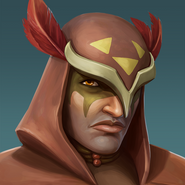 Strix's in-game profile
Add a photo to this gallery

Retrieved from "https://paladins.fandom.com/wiki/Strix?oldid=8777"
Community content is available under CC-BY-SA unless otherwise noted.