Talus might still be young and overly-optimistic, but he's got big plans. After almost losing his family to an angry mob who refused to accept the otherworldly Ska'drin as neighbors, he set out on a quest for knowledge.

From the shores of an abandoned island paradise to the darkened corridors of the Deepwerks, he worked to uncover forgotten truths and unlock his inborn aptitude. When the Resistance rose up to oppose the Magistrate, he joined them, eager to put his newfound abilities to work and prove that the Ska'drin deserve a place in the Realm.

A short to medium ranged weapon that deals 95 damage every 0.1s.

Charge forward, hitting enemies for 600 and knocking them straight back.

Overcharge your weapon, causing it to fire 33% faster for 4s.

Inscribe a rune on the ground that will teleport you back to its location after 10s or when reactivated. Teleporting cleanses all effects.

After a brief charge-up, target an enemy and travel directly to them from anywhere, dealing 600 damage and knocking them back.

For all of Talus' cards, see Talus/Cards

Paladins - Ability Breakdown - Talus, of the Ska'drin
Add a photo to this gallery 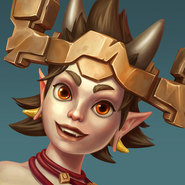 Talus' in-game profile
Add a photo to this gallery

Retrieved from "https://paladins.fandom.com/wiki/Talus?oldid=8781"
Community content is available under CC-BY-SA unless otherwise noted.