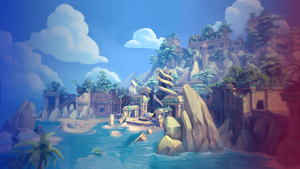 At a later point, the individual sections would eventually be turned into their own standalone maps.

As this map was originally only a combination of the three maps it would later be divided into, with all maps still visible from another, it can be assumed this map is still canon to a degree, disregarding certain changes such as Frog Isle's visual rework and other minor changes to the individual maps.