The Summoning of Raum 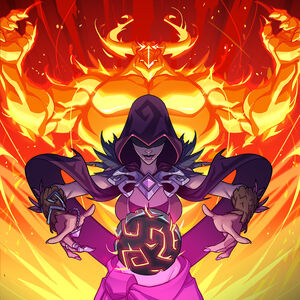 After nearly losing his life in the desert, Corvus grows fearful that the Resistance is becoming too powerful, leading to him being deceived into summoning Raum.

Shaken in the recent battle against the Resistance within the Shattered Desert, Corvus had grown fearful, barely escaping with his life and believing the Resistance to have gained the support of two godlike beings. Corvus was desperate to find something to help even the odds, as he thought it only a matter of time until the Resistance effortlessly destroyed the Magistrate.

And then, a solution appeared before him, Seris, using the body of the girl he had previously sacrificed in an effort to save the village of Seris, appeared before Corvus with an offer; a unstoppable force reared in the eternal conflict of the Abyss, nobody would expect it, and it would annihilate anything that stands in its way. An Abyssal Lord under the Magistrate's control, that would indeed turn the tides of the war, and so, Corvus recklessly accepts the offer out of desperation, unleashing the Abyssal Lord Raum, Rage of the Abyss, into the Realm.

However, Raum is not one to be controlled, and instead of assisting the Magistrate, began to cause chaos and destruction throughout the Realm. While Corvus intends to fix the mess he's caused, the Magistrate, and his father, Karne, have had enough, and exile Corvus from the Magistrate for allowing an Abyssal Lord into the Realm. Despite this, Corvus believes they have no idea what the Realm needs to survive, no idea what he's done or is attempting to do for the good of the Realm. With the few still loyal to him, Corvus intends to control the Abyss, defeat the Resistance, and bring about a new Golden Age of peace the likes of which have never been seen before. Corvus will do what he must, for the Magistrate.

Meanwhile, Raum would continue his rampage throughout the Realm, being a threat towards both the Magistrate and Resistance. His rampage would last from Autumn until early winter, where he would encounter the Tigron Weapons Master, Tiberius. Using his sword forged from the heavens themselves and capable of banishing unspeakable evils, Tiberius battles the Abyssal Lord to a draw, putting a temporary halt on the beast's rampage.

However, the Abyss is not the only threat the Realm has to worry about...

I've earned their respect, and I have been invited to join the Judges with an honorary place at the cadet's table, but I'm struggling to come to terms with the medal they're (short indecipherable portion scratched out) awarding me for "bravery" on our patrol. It's hollow. I never would have imagined such a monstrous thing could exist in the Realm. So many lives were lost. What does 'bravery' matter if I failed to bring everyone home? Apparently, it has also earned me some new assignment that everyone refused to speak about. None of it matters, though. As long as in a month from now, this new position gives me the power I need to keep my people safe.

They say the most difficult decisions test the strongest of wills. Mine was tested today. Nobody but I understood why it had to be done - that this was the one chance to save everyone. One girl's life was to be given at the exchange for the entire town's - but in the end, it didn't matter. The entire city of Seris was destroyed by the Abyssal explosion that her death was meant to prevent. It is m my burden duty to protect as many as I can. If deciso decisions like this mean that the people I seek to protect despise me, then at least they are alive to do so.

I had to try. How many lives have been lost already? How many under my command had died in this endless conflict with the misguided 'Resistance'?

This was meant to turn the tides - an Abyssal Lord under Magistrate control would have ended things quickly. The Resistance, with their star-god and the moon goddess; their vision will see the Ma Magistrate gone, and with it, the Realm. So I did what I needed to be done.

That lying oracle took advantage of our desperation. She whispered her lies, and I believed them. No more. All I've done in service of the Realm, and the Magistrate, and this was no different. I'll be the one to fix this, all of it.

So it has come to this. I've been tried for my "crimes" against the (short indecipherable portion scratched out) Magistrate and the people. This morning, I heard them list off why I should be chastised, and I laughed. They have no idea what this Realm needs to survive.

I now control power my father has deemed "unfit" for humanity; my men still stand by me. Only I have the strength. Only I have the willpower to bend the Abyss. No more proxies. No more lies. I will put the Resistance in its place and usher in an age of prosperity the likes of which this Realm has never bef before seen.

I will do what must be done.