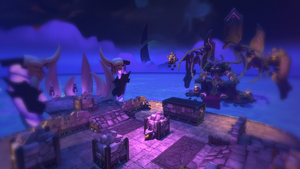 Throne is one of the maps in Paladins and was released in the Paladins 1.3 update. It can only be played in Custom.

This map has mirrored layouts and is designed for 2 teams of 5 players. The bases are located at opposite ends of the map.

It was released for the Rise of Furia event. But now the only Game Mode that is currently playable in this map is Team Deathmatch. This map can only be played in Custom matches, as well as the occasional Limited Time Mode that may feature the map.

A unique verson of this map without many of the large structures around the spawn areas was used in the "It's Treeson Then" Limited Time Mode.

Atop the Abyssal Throne sits a powerful Abyssal Lord, or rather, it did once sit there, now the throne remains empty as the Abyssal Lord in question is believed no more, as it has since seemingly been destroyed by Furia.

This map appears to be located within the Seas of Despair.[1][2]