?
Tiberius is a Damage Class Champion in Paladins, added on January ?th 2020.[1]

His is a tale of charm and daring — heroic feats backed by deadly prowess. A traveler of the Realm looking for worthy foes to test his mettle, sharpening his skills and weapons alike. Adored by the people, feared in battle — Tiberius, The Weapons-Master, knows no equal!

Born of the Tigron, Tiberius is the pinnacle of their values. A dashing legend — bold, brash, and relentless — anointed by an ancient blade, destined for battles that are nothing short of legendary.

With Chakrams, forged by the weapon-smiths of his ancestors; and a sword, forged from the heavens themselves — an ancient artifact capable of banishing unspeakable evils from this world — he is ready for any threat! Tiberius is exhilarated by the opportunity to match blades with a worthy foe. Snarling, he charges headlong into the fray, unleashing an unrelenting storm of steel, claw, and fang. En garde!

Sling Bladed Chakrams from your hand every 0.7s, each bouncing off floors and walls and dealing 650 damage to any enemy hit. The Chakrams can bounce up to two times before disappearing.

Throw your Heavy Blade in a straight line to pierce shields and enemies, dealing 800 damage and slowing them. Can be recalled through enemies to deal 500 damage to them.

Crouch down, then launch yourself forward through the air.

Channel your energy, increasing your Attack Speed and Movement Speed by 30% for 4s.

Flourish your Heavy Blade and gain the ability to use Striking Tigron and Whirling Blades up to 5 times for 15s.
Striking Tigron: Instantly dash forward in any direction, passing through all enemies and dealing 650 damage to any enemy hit.
Whirling Blades: Launch yourself upwards, whirling your blade around you and becoming immune to damage. On landing, deal 1000 damage to all enemies within 30 units.

Paladins - Champion Teaser - Tiberius, the Weapons Master
Add a photo to this gallery 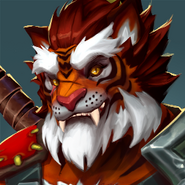 Tiberius by Charley Fox
Add a photo to this gallery

Retrieved from "https://paladins.fandom.com/wiki/Tiberius?oldid=8930"
Community content is available under CC-BY-SA unless otherwise noted.