As the ranking scholar and preeminent authority on runic lore at the Deepwerks facility, Torvald is one of the architects of the wave of crystal-powered technology sweeping across the Realm. Though he would much rather have his nose buried in a dusty old history tome or reach into a swirling vortex of magical energy using his enhanced stone gauntlet, he understands that the Magistrate is the driving force behind all his research and has joined their effort to put down the Resistance.

Once the war is over, he can once more get back to work.

A channeled beam of runic energy that locks on and deals 50 damage every 0.1s to a single target.

Shoot out a short range blast that Silences and Disarms enemies for 1.5s.

Unleash the latent power of your Gauntlet, channeling a blast that applies a massive knockback to all enemies for 2.35s.

Paladins - Champion Teaser - Torvald, The Runic Sage
Add a photo to this gallery 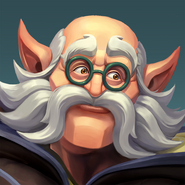 Torvald's in-game profile
Add a photo to this gallery

Retrieved from "https://paladins.fandom.com/wiki/Torvald?oldid=7399"
Community content is available under CC-BY-SA unless otherwise noted.