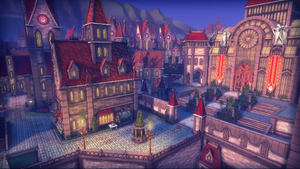 Team Deathmatch
King of the Hill

Trade District is one of the maps in Paladins and was released in the Paladins OB65 update. It later received a visual rework in the 5.4 update.

This map features an asymmetrical layout and is designed for 2 teams of 5 players. The initial spawn locations are located at opposite ends of the map.

The Game Modes that are currently playable in this map are Team Deathmatch and King of the Hill.

"Once an affluent cultural hub, the Trade District shared a border with Greenwood and facilitated commerce between the North and South. However, constant skirmishes have left the city a shell of its former glory."[1]

In the shadow of the Magistrate's Stone Keep, Trade District is usually bustling with trade and commerce from around the Realm. But now, the streets are filled with the ongoing conflict between the Magistrate and Resistance. This information can be found here.

As can be seen in Trials of the Realm[1], Trade District is part of a larger area known as 'Trade Row', alongside Timber Mill and Fish Market.

Can commonly be seen around the map, making champions with knockback abilities ideal for easy eliminations. Champions that lack flight/teleportation abilities are susceptible to being launched off the map without having any sort of means for recovery...

In the RWBY update, Trade District received a visual rework.

DeveloperCommentary: Trade District is the last of the Magistrate city maps to receive the visual upgrade we began with the Magistrate’s Archives map. The buildings have all been updated to the signature Magistrate aesthetic, dark metal, and stonework with red accents, and the overall map has been made into a much more urban environment. Tightly packed row houses and soaring spires line the streets. Care has been taken to add additional shops to the map and improve existing ones. Flowerbeds have been added throughout the map as accents to the imposing buildings to create a more inviting space. All throughout the map, areas have been opened up to offer a glimpse of the city beyond this district, making the world feel as though it extends far beyond the bounds of the play space. In the distance silhouetted by the sunset, keen-eyed players will spot the imposing towers of Stone Keep keeping watch over the city below. We hope players enjoy exploring this reimagining of Trade District.