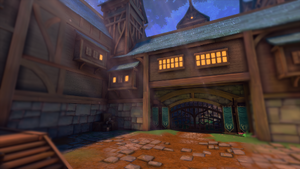 The Tutorial is one of the playable maps and also a Training mode in Paladins and was released in the Paladins CB35 update.

This map is exclusive to Training mode. It allows new players to learn the basic controls and mechanics of the game. The tutorial will start automatically after the player has logged in for the first time and can be skipped. After completing the tutorial, players will receive the award "Well Trained", which includes 40,000 account XP and 25,000

The champion playable in the tutorial is Viktor. The first thing the player is taught is how to move forward and backward with the keys W and S and also how to strafe with the keys A and D. After this exercise, the player can leave the spawn and follow Ying to the Shooting Range. There the player's health and the Out of Combat regeneration is made clear.

Now it's time to move on with the champion's abilities. Viktor's primary weapon is the Assault Rifle, which can be used with the Left Mouse Button. By pressing Q Viktor throws a Frag Grenade. Furthermore, Viktor can hustle with F. To aim better, Viktor can use the weapon's iron sights with the Right Mouse Button. Most abilities have cooldowns after they are used. Finally, Viktor's ultimate is shown which players can activate with E. But the ultimate has to charge first before the player can use it.

After the ability section, Paladins main game mode is told: Siege. The player will start on a mount to travel faster. The player can also jump while riding a horse by pressing Space. Finally, the two main objectives of Siege are explained and how to achieve them.

Then the player can successfully complete the tutorial and receive the rewards.

Due to the map's nature as a tutorial, is unknown if this location is canon in any form. Due to the similar appearance to the various Greenwood maps, it's assumed that if it is canon, the map is located within Greenwood.