Raised to shoot straight and survive the harsh winters of the frontier, Tyra signed on with the Magistrate army at a young age. After the Sentinels' disastrous final mission, she returned to her homeland to make a living tracking down the monstrous threats to the common folk that lurked beyond the fringes of the Realm.

Her unyielding stamina and pinpoint accuracy with the rifle serve her well in her new role: helping the Resistance fight back against the Magistrate and bring an end to the war that rages across the Realm.

An automatic rifle that fires every 0.09s, dealing 120 damage and Healing Tyra for 15% of the damage dealt.

Fire a grenade that explodes on impact, dealing 700 damage.

Mark an enemy, Revealing them and increasing the damage they take from your weapon attacks by 15%. This ability lasts 5s and has a range of 300 units.

Hurl an incendiary device that leaves a pool of fire on impact. Enemies that contact the fire will burn for 9% of their maximum Health over 0.6 and have their Healing received reduced by 50%.

Increase your Attack Speed and Movement Speed by 40% for 4.5s. During this effect, weapon shots will not consume Ammo.

Paladins - How to Play - Tyra (The Ultimate Guide!)
Add a photo to this gallery 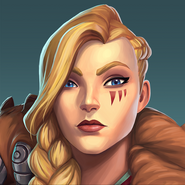 Tyra's in-game profile
Add a photo to this gallery

Retrieved from "https://paladins.fandom.com/wiki/Tyra?oldid=8789"
Community content is available under CC-BY-SA unless otherwise noted.