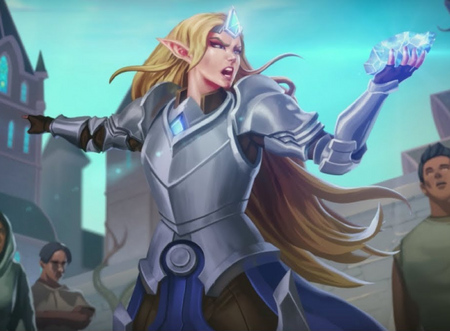 Valera is a near-immortal elf warrior who was the leader of the original Paladins and now leads the Resistance. Valera, alongside Karne and the former Paladins, ushered in a new golden age. She would rise again years later opposed against the Magistrate's banning of Crystal-Powered Technology, forming the Resistance.

Long ago, the Realm was in chaos; though the dragons had been dealt with by the Warders, a new threat kept the Realm in chaos: the Goblin Scourges. The northern side of the Realm was the victim of this chaos, and in response, a group of warriors, the Paladins, came together to end this threat, with Valera, a powerful warrior, leading the group. After two of the scourges, along with the assistance of the newly created Stagalla, the Paladins fought back the goblins and had finally brought peace to the Realm.

With no more threats, there wasn't any need for a group of warriors, and so, their job fulfilled, the group disbanded, Valera heading back to her normal life as a new group, the Magistrate was created, led by her ally Karne as Grand Magister. The Realm would enter a Golden Age that would last for nearly a century.

However, a new discovery was made that would begin the end of this peace; a new form of magic focused through crafted crystals with near limitless potential for technological advances; a crystal-powered revolution overtook the Realm, with many fantastic new inventions being created. However, not everyone had the purest of intentions.

Accidents, power-hungry individuals, loss of life and misuse of power threatened the peace and safety of the Realm. Karne, fearing these accidents and individuals would send them back to chaos and war from time's past and destroy everything that had been built, decided to outlaw crystals from the general public; hoping to keep the Realm peaceful.

However, not everyone agreed with Karne, with many rallying behind Valera, who herself disagreed with Karne's actions, believing freedom to be more important than peace, leading to the creation of the Resistance. Valera would weaponize crystal magic, and reawaken the old Stagalla to help her once more, the stone people oath-bound to assist. Though the Resistance was almost defeated in their first battle after the loss of one of the Stagalla, Terminus, the other remaining Stagalla, Inara, rallied the group and reinvigorated them. With the group's morale restored, Valera urged the group to take up the flag of the old Paladins once more, and thus, the Crystal War had begun.

At a later point, Valera led the Resistance deep into the Shattered Desert in search of shards of the moon. Eventually, the group encountered the Magistrate, there for the same reason, and later, they also came across the time-traveler Atlas, who revealed what would happen to the Realm if current events continued. The group eventually encountered the Magistrate once more, resulting in a massive battle between the two sides in the desert town of Bazaar.

The Resistance, seemingly being outmatched, caused Valera to call out to the Moon Goddess of the town, Io, and with some further encouragement from Jenos, the Shattered Goddess arrived in her town to protect her followers from the battle.

It's unknown what became of Valera and the original Resistance following Karne stepping down as Grand Magister and giving leadership of the Magistrate to House Aico.

In the Lost Future, Valera would seemingly be killed by Yagorath herself.