The former commander of Sentinels, an elite Magistrate military unit, Viktor lives in shadow of his former glory. He took the blame for what happened during their final mission, was stripped of his rank, and reassigned to a lower position by Grand Magister Karne. Through disgraced, his training and skill as a soldier remain unmatched, along with his unwavering loyalty to the Magistrate.

Determined to regain his standing, he pushes himself well beyond his limits in battle against the Resistance, striving to end the rebellion before the conflict truly rages out of control.

A Sentinel-issued military assault rifle that deals 135 damage every 0.1s.

Look down the barrel of your gun and increase your Accuracy. Your Movement Speed is reduced by 50% while using Iron Sights.

Throw a fragmentation grenade that deals up to 750 damage in an area. Holding Q will cook the grenade and reduce its detonation time.

Bring up your targeting binoculars to rain down damage on enemies. Target an enemy player to guide an artillery shell to their location, dealing 1400 damage in an area. Using this ability consumes 40% of your Ultimate charge, and each shell consumes an additional 20%. While using Barrage, your Movement Speed is reduced by 40%.

Viktor's high damage output and simplicity make him the perfect option for any player new to Paladins, or shooters in general.
Assault Rifle
Assault Rifle loses accuracy the longer you hold down the trigger. Try firing in short bursts at long ranges.
Know when to switch between hip firing and Iron Sights. When in a close-range gunfight, using hip fire is more applicable. In a 1v1 duel, you want to land as many shots as possible, so go for Iron Sights.
Iron Sights
Iron Sights makes Viktor's gun almost pinpoint accurate, making it a good option for long-range firing.
Frag Grenade
The longer you hold down Q, the shorter the detonation time will be, meaning in close fights, that is a more viable option than simply chucking the grenade out there. However, holding Q down for too long will result in the grenade blowing up in your face.
Hustle
Hustle is a great way to get into a fight, and swiftly get out if needed. Also, since Hustle has no cooldown, you can use it freely in any situation.
Dashing around the objective can be a somewhat useful tactic to hold it out while your teammates come to back you up.
Barrage
A well timed Barrage can easily wipe out a whole team.

Paladins - How to Play - Viktor (The Ultimate Guide!)
Add a photo to this gallery 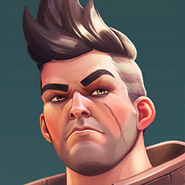 Viktor's in-game profile
Add a photo to this gallery

Retrieved from "https://paladins.fandom.com/wiki/Viktor?oldid=8751"
Community content is available under CC-BY-SA unless otherwise noted.