Rapidly rising through the ranks of the Magistrate, Vivian's clever, persistent scheming got her appointed to the Deepwerks facility, where she was the first to recognize the military potential of the research they were conducting. In the swirling chaos of the war with the Paladins, she sees only the opportunity to advance her station in life.

Equipped with some of the most advanced crystal-powered weaponry ever created, she joined the battle not to prove herself or follow orders, but to silence the lone witness of her true plans.

A versatile light machine gun that deals 170 damage every 0.14s.

Look down the barrel of your gun and gain increased accuracy.

Throw out drones that reveal your enemies to all allies.

Project a shield in front of your gun to prevent up to 1400 damage.

Summon 2 drones that fire energy blasts where you are shooting every 1s, dealing 200 damage.

Paladins - Champion Teaser - Vivian, The Cunning
Add a photo to this gallery 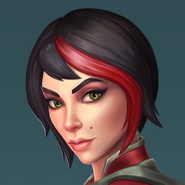 Vivian's in-game profile
Add a photo to this gallery

Retrieved from "https://paladins.fandom.com/wiki/Vivian?oldid=8624"
Community content is available under CC-BY-SA unless otherwise noted.