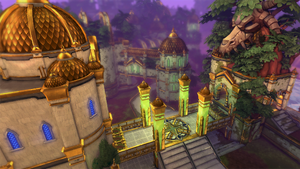 Warder's Gate is one of the maps in Paladins and was released in the Paladins 1.9 update. It later received a visual rework in the 5.2 update.
Like every Siege Map, Warder's Gate also has certain callouts.

Trials of the Realm Bio:
"Once a thriving city and training center, Warder's Gate now sits mostly empty since the disappearance of the Warders. Still a place of power, it has become home to proxy conflicts between warring factions."[1]

Other Information:
One of many ancient Warder architectures, with a mystical forest located nearby, as revealed here.

As mentioned in the Monstercat update notes, this map is also a Warder City, with the whole thing being covered in protective enchantments that are now fading.

There exist two on this map on each team's appropriate side. Entering one will teleport a champion into the interior of one of the buildings, which are located at the side of the capture point.

In the Monstercat update, Warder's Gate received a visual rework.

Developer Commentary: With the update to Warder’s Gate we wanted to push some of the original goals of the map a bit further. Namely we wanted to improve upon the contrast that develops between the two sides of the map as this empty Warder City, with it’s protective enchantments fading, is slowly consumed by nature.

We’ve cranked up the clean, shining opulence of the intact side of the map by adding more golden details into the architecture and focusing on dragon and scale themed ornamentation. The skybox on this side also better reflects our original vision of the map being just one part of a larger city, additional buildings can be seen covering the surrounding hillsides still untouched and gleaming.

On the natural side, more vines, leaves, moss and sap have been pulled in to emphasize nature taking control of the area. A few dragon skulls are affixed to buildings, another reminder that even these great beasts are subject to the whims of nature and so too is the city.

We’ve used glowing crystal pillars to help emphasize the location and importance of the capture point with a unique landmark. And we’ve updated the water in the map to use the more stylized material treatment we’ve applied to more recent maps. We hope you enjoy this updated take on the Warder’s Gate map.