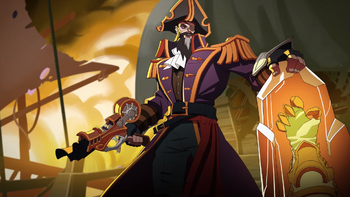 The Warder's Relic are two Warder gauntlets acquired by the Resistance following their victory at Dragon's Call and later stolen by Dredge, though it led to the admiral's death as he was not worthy to control the power of the dragon.

Using the gauntlets, it's possible to command dragons, though it's unknown if anyone can utilize them or only Warders. The gauntlets are currently used by Imani.