Robbed of his noble lineage, Zhin ruthlessly carved out his own throne atop of the criminal underworld. By the time he was a man, he'd won the loyalty of enough thieves, assassins, and corrupt bureaucrats to build his own shadowy empire: the Thousand Hands guild. Anyone scheming against him had a way of vanishing in the middle of the night, while those confronted him directly met their doom at the end of his wicked flaming sword.

He refuses to pick a side in the war, as there's more profit to be made playing them against each other.

Within 2 seconds, hurl burning oil with two quick swings that deal 450 damage and a heavy swing that deals 700 damage.

Enter a counter stance for 2s. If you take an enemy hit to the front of your character you negate any effects of the hit and counter attack with a melee strike dealing 700 damage.

Lunge forward while swinging your blade in a deadly arc dealing 400 damage to nearby enemies.

Launch forward and incapacitate an enemy with a series of vicious melee attacks dealing 2000 damage over 1.5s.

Paladins - Zhin - Ability Breakdown
Add a photo to this gallery 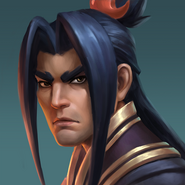 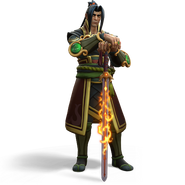 Promotional render for Zhin
Add a photo to this gallery

Retrieved from "https://paladins.fandom.com/wiki/Zhin?oldid=7407"
Community content is available under CC-BY-SA unless otherwise noted.